World reacts to Cristiano Ronaldo’s UCL sending off against Valencia 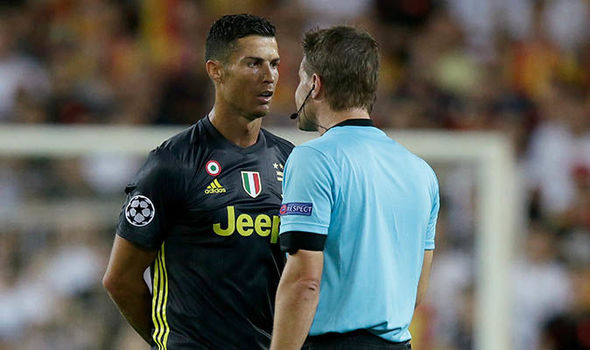 Cristiano Ronaldo has a long and proud history in the Champions League having been the only player to have won the tournament five times during his career, although the Portuguese international sending off against Valencia on Wednesday night – first in his career at the tournament – caused a certain amount of controversy between fans and non-fans of Ronaldo on Twitter.

The five-time Ballon d’Or winner was controversially sent off after just 30 minutes of his Champions League debut for Juve as he got into a bit of a tangle with Valencia player Jeison Murillo. The two clashed in the Valencia penalty box and the latter went down very easily. However, Ronaldo reacted and implored with the defender to get up before video replays appeared to show him pulling the Colombian’s hair.

Cristiano Ronaldo wept tears of frustration after his Champions League debut for Juventus ended in a sending off against Valencia https://t.co/XSXgUF1f2G pic.twitter.com/ksOpPV5gjh

The referree’s decision was a contentious one and caused uproar as former players, pundits and fans reacted to the 11th red card in the player’s career.

Ronaldo’s sending off could mean that the forward will be suspended for at least two Champions League games, including a potential return to Old Trafford when Juventus take on Manchester United on 23rd October.

While there some Twitter who were adamant that Cristiano Ronaldo’s actions with Jeison Murrilo didn’t warrant sending off, there are some others who believed his sending off was really worth it as no player should be above the law.

We’ve highlighted some of the best Tweets below:

Surely got to appeal this… @Cristiano?? #Juve #UCL pic.twitter.com/aL76vq2xTj

Ronaldo gets a red card half an hour into his Juventus Champions League debut. Tears flowing.

? Even the best fall down sometime ?

Judge for yourself does this worth a fcukin' red card?
The referee clearly need to retired from football.#ValenciaJuve #UCL #Cristiano#Ronaldo#Juve pic.twitter.com/yUePZKFAHZ

Sending him off for this. ? #Ronaldo will make y'all pay! #ChampionsLeague #Juventus pic.twitter.com/QZPRcEHY6y

Grabbing opponent by the hair to stand up is disrespectful.

Too bad for Ronaldo

Ronaldo's sending off last night has a lot to do with his exit from Real Madrid. Cuz like it or not, football is becoming political and Perez is the man in control! Modric winning the UEFA Player of the year ahead of Ronaldo is proof to this… no disrespect to Modric.

He was in tears once, you know what happened then. Just wait and watch.#Ronaldo pic.twitter.com/XkubWk3lI9

Been seeing allota views on the Ronaldo red card since yesterday, i was also confused too but when i got a better view on the vid, i dont knw if its worth a red but the hair pulling was a form of disrespect on the Valencia player.. That surely deserved a card! Dunno whch 1 tho!

The more I think about the Ronaldo incident, the more I change my mind. I think referee could’ve gone either way and either way he’d be right. I think if it was just the hair pulling or the kick, it would’ve been a yellow max but both together is a red. I’m not sure.